Greg Mortenson: A Simple Mistake or a Real Deception?

This past week my class was informed that Greg Mortenson and his Central Asia Institute was being investigated by CBS News “60 Minutes”. It was horrifying to find out that the television news program had uncovered evidence that some of the compelling stories depicted in his book, Three Cups of Tea, were possibly untrue.

When the semester first started, my classmates and I began reading Three Cups of Tea. We were captured by his stories and his perseverance to make the lives of the children in Pakistan and Afghanistan better through education. This book opened our eyes to the specific cause we were striving for and made Greg Mortenson’s work into an example for us to emulate. It is unimaginable that someone who is doing so much good for the world would take advantage of the proceeds and would lie about various other aspects dealing with his organization, which is what “60 Minutes” published in its report on Sunday night.

I honestly did not believe all of the accusations against Greg Mortenson initially. It did not make sense to me that someone who was willing to dedicate his life to helping others would act out of greed or act in the wrong way in relation to his beloved organization. However, in light of recent revelations by 60 Minutes I am starting to change my mind.

"Into Thin Air" by Jon Krakauer.

I am usually not swayed by what the press says because I know that there are at least three sides to every story: one person’s side, the other person’s side and the truth is found somewhere in between their two versions. For example, Greg Mortenson spoke about a village called Korphe that took him in and practically saved his life on his mountaineering trip to K2. Yet, producers at 60 Minutes spoke with the specific people in Korphe that had allegedly saved his life and they assured the renowned news magazine show that no such events occurred. These people were shown in the news report as saying that Mortenson had never been to Korphe during that time, that it was a year later when Mortenson arrived in Korphe and eventually built a school there.

Into Thin Air by Jon Krakauer was one of my favorite books in high school because it revealed the struggles and dangers of mountaineering to me. I built up a lot of respect for the mountaineering world and specifically for Krakauer after I finished the book. Krakauer’s interview against Mortenson was very strong considering that he talked about Mortenson’s former employees to attack Mortenson’s inappropriate use of the donations. I was shocked to find out figures such as $1.5 million was used for advertising Mortenson’s books and $1.3 million was used for domestic travel some of which was in private planes. The final evidence that took me by surprise was when 60 Minutes surprised Mortenson at a book signing and with a look of terror on his face Mortenson refused to talk to them at all; then he gave one of his men a look translating into “Get that guy out of here.” 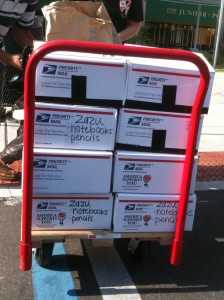 The 8 boxes of school supplies I packed and brought in today!

While I still think Mortenson’s work is valuable and very important, I am a little worried that the Central Asia Institute is not everything I thought it was. I genuinely feel that his overall message is more important than the specifics of his book; after all, whether it was all true or not, it got me to believe and understand his cause more than I could before reading it. I am hoping that now the funds will be allocated correctly and that all of the schools will receive what they were promised since the Central Asia Institute will have to be careful of everything they do.

Here is a link to the CBS 60 Minutes report:

And here is a link to a rebuttal from Greg Mortenson and CAI:

On a happier note, today in class we also started writing thank you letters to everyone who has helped us along this journey to promote education in Afghanistan. I also brought in the 8 boxes of school supplies I packed alone that a fellow student in my science course went out and raised. Our last piece of the puzzle for now is to get all of our money in which should be coming together within the next couple of weeks. Zoe and I have plenty of people to thank so we are definitely going to start our thank you letters today! If you want to help send our boxes to the children in Afghanistan and want to promote education, go to https://schoolsuppliesforafghanchildren.wordpress.com/donate-to-our-shipping-fund/ and support our shipping fund! (Editor’s note: This class and the School Supplies for Afghan Children project are run in cooperation with Holland & Knight Charitable Foundation, a registered 501c3 nonprofit. The donations are shipped to US troops in Afghanistan and distributed as part of humanitarian missions. A full 100% of the money donated to the shipping fund is used for shipping. For more information click the link below: http://afghanistanmylasttour.com/school-supplies-for-afghan-children/) 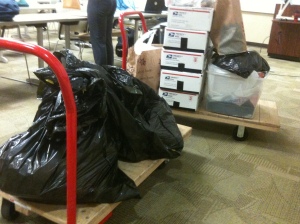 All of the school supplies everyone brought to class today!

49 Responses to Greg Mortenson: A Simple Mistake or a Real Deception?